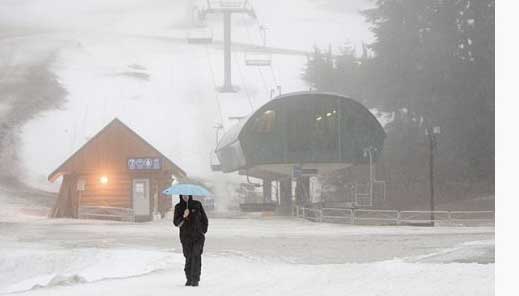 The rain. What Does it mean for our growth?

If you follow city and county government, you KNOW that the population of our area is GOING TO INCREASE by over a 100% in the next few years. We’ll go from 35,000 people to 80,000. Therefore we must plan for the future by limiting traffic, building light rail, and having plenty of quick serve restaurants to meet the demand.

Yet, isn’t this year interesting? We had an early snow that allowed PCMR to open by Thanksgiving, but, if we are honest, we’d call our early season warm and rainy. Many people would say it’s an anomaly. For now it may be. However, if you read the studies on global warming, our winter season is going to get even shorter. Our summer season is going to be hotter and drier. This early winter is likely a cautionary tale for what is coming.

If you delve into specific studies like the one PCMR did in 2009, you’ll find that in 15 years “projected decreases in snowpack will have severe economic consequences for the region. By 2030, the estimated decrease in snowpack is estimated to result in $120.0 million in lost output. This lost output is estimated to result in an estimated 1,137 lost jobs and $20.4 million in the form of lost earnings (or labor income).” To put that in perspective, $120 million is 50% more than the entire impact of Sundance as calculated by the University of Utah.

What does it all mean? We really don’t know. That’s above our pay grade. However, we do note the inconsistency with those that both believe global warming is happening and that our population is going to explode. If global warming is happening (which we would say is the scientific bet), and summers are hot and winters rainy, we’d guess the trend of influx into our little town will slow. Given that, our 30 year plans should probably look a lot different from they do now.